Well folks, UMass basketball finalized its non-conference schedule today, as reported by just about everyone but put into the most easily-read format by the Collegian’s Nick Canelas.

Most of this has been known to those of us who read or, heaven forbid, post on UMassHoops for quite a while, but since not everyone reads that board (blasphemy, I know), here’s a rundown game-by-game of what the Minutemen can expect.

Last year, in a harbinger of unfortunate things to come, UMass managed to almost lose at home to the AIC Yellow Jackets, a program and school so inconsequential that for fucksakes, it takes like an hour to find them on the disambiguation page on Wikipedia for “AIC.” On the other hand, look at that goddamn bee. It’s clearly been hitting the gym a little.  That said, if this game is within 20 points at halftime, this season is already a disaster FIAR KELLOGGG!!!!11

Time TBA? Hopefully our new friends on Twitter are able to stay up late enough to watch it on a school night.

UMass fans have proven time and time again that it’s not the quality of the opponent, but rather how many times ESPN has told them said school is relevant that determines whether they show up for games. The Tigers have been pretty mediocre-to-bad for several years running now (since Big Baby and Tyrus Thomas brought them to the Final Four in 05-06), but if we can nearly sell out a hockey game against UConn by name recognition alone, we should draw a good crowd here. Of course, the mitigating factor is that the game is at 11 am on a weekday, which I’m sure the anti-athletics faculty will lurve, but this is a great situation: a winnable home opener against a team that it will excite fans (duly or not) if we beat.

This was the biggest surprise on the schedule, in the sense that nobody was expecting them and also in the sense that apparently they’re still a D1 program. Located on the Ohio/Penn border in a part of the country that literally exists as a conduit between places where good things ever happen, the one redeeming thing I was able to find about YSU is that their mascot is this badass fucking penguin. Now I’m amped. 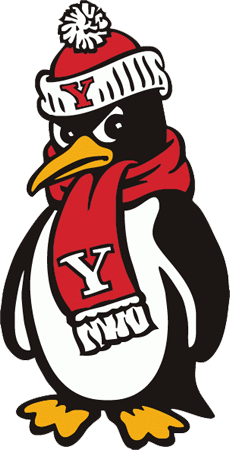 thanks to @Daniel_Malone for the heads-up and link

Another lower-tier team from a higher conference. UMass needs to knock this one out because it’s gonna be a huge missed opportunity in all likelihood if UMass doesn’t get to play UNM.

Barring catastrophe, we won’t be seeing Alabama-Birmingham (bet you had to look that one up), and that means a meeting with the supposed alma mater of Krazy 8. Should be a hungry team after getting embarrassed last season by Harvard, although I wasn’t exactly sure why in the first place everyone expected them to roll through a snoozer of a conference schedule then suddenly not be susceptible to a first-round upset. Nevertheless, a win here could be a big RPI bump down the stretch.

Is this a conference game? I’m surprised TBA isn’t in the A-10 yet. I heard they passed on an invite from the AAC…

(Seriously, I hope we get to smoke Temple one last time.)

Ypsilanti is an interesting little town in the sense that it’s a place conveniently near a far superior town named Ann Arbor. Also it has a combination Tim Horton’s/Wendy’s. So there’s that. Otherwise, yawn.

Fight Mass dot com will be in South Bend for UMass’s trip to play Notre Dame on the hockey ice and whatnot, so we won’t be around for the annual “home” game in front of friends and family in scenic Springfield. Nonetheless, another good chance for UMass to beat a team that isn’t going to be as good as its name, which is always a plus in the fans’ eyes.

An interesting theme I’ve noticed with boring teams in the Midwest is that they play in places called “Convocation Center” or “Sports Arena” or “Nondescript Event Structure.” You’d think that’d scare off potential recruits, though Athens, OH has an inexplicable party culture not unlike a certain other public state U in a similarly rural location.

Fun fact: Here is the naming history for the BB&T Center, aka the home arena of the Florida Panthers (which, for the uninitiated, is a professional hockey team. No, really! Look it up!)

Pro sports in South Florida, ladies and gents! Oh, this game is winnable, too.

About goddamn time. There’s no good reason why UMass, for several years running a quality RPI team, can’t get the “big boys” locally to schedule them. And if UConn and BC still feel like being little bitches about it, we’ll take this home-and-home with a fellow Hockey East squad.

I’d yawn again, but remember, Elon was the team that Chaz debuted against and won all our hearts, so somehow by extension we keep Elon in our hearts. And also, we never tire of asking “what’s an Elon?”

So that’s what we’re up against. A very manageable schedule with some exciting challenges, many of which will be at home. We’ll see you guys at the Garden in a couple months.

We are in no way affiliated with the University of Massachusetts, its athletic department, or any of the assorted media that follow it, obviously.
%d bloggers like this: