Welcome back to UMass sports, guys! Hope you had a merry Christmas and also a non-denominational Happy Holiday, especially you, Nick Canelas. We now return to your regularly schedulWHAAAAAAAAAAAAT? 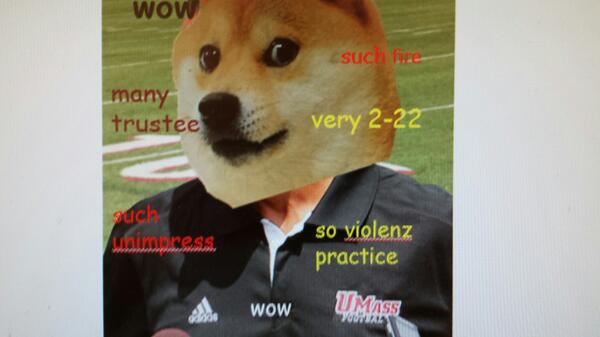 Yeah, so I’ll admit, Charley getting das boot this quick was a bit of a surprise given that, oh I dunno, it’s almost January already and whatnot. But timing with coaching hires isn’t really the UMass way, is it? It does suck to take the focus off of the basketball success story by getting the local media all abuzz about how awful the football program is again (didn’t we just do this a few weeks ago?) but, as much as I wanted to see Charley succeed, the reaction from the players and donors seems to suggest that there was more to this than just the 2-22 record. I don’t think he buried the school the way Morris did – we had, and hopefully will still have, pieces to build around. Molnar’s lack of progress in year two suggests he might have just not been the right x’s-and-o’s coach for the job. Anyway, now begins the coaching search, so, you know, Nick Saban would be a good pick IMO. I’ll settle for Mark Whipple though. A lot of schools would settle for Mark Whipple.

I was tempted, by the way, to take down Dan Shank’s “column” for the Globe where he goes on and on about how happy he is to see UMass fail, but given his recent track record in sports predictions, maybe this is the best thing that could have happened to UMass. In which case, thanks for the reverse jinx! But seriously, #logoff.

So moving on to happier thoughts, the basketball team ah goddamnit they lost too didn’t they. Yes, in the world’s least aesthetically-pleasing game, played with rims made of granite on a sliding panel of styrofoam, the Minutemen suffered their first loss of the season 60-55 at the hands of Florida State last weekend. Nothing really went UMass’s way, from god-awful shooting from 3 and the FT line to lousy officiating (including a glorious missed foul at the end that could’ve been avoided by jacking up another 3, which we would have missed anyway, but still). In the good news column, the loss only dropped us to #2 in the RPI since Florida State is a much better team than people are giving them credit for, even if they did also play like dog shit. Whatever, we’re gonna have a packed house against Providence on Saturday, we’re still ranked. Feelin’ fine.

Anyway, I leave you with this. Good night, sweet world.

We are in no way affiliated with the University of Massachusetts, its athletic department, or any of the assorted media that follow it, obviously.
%d bloggers like this: